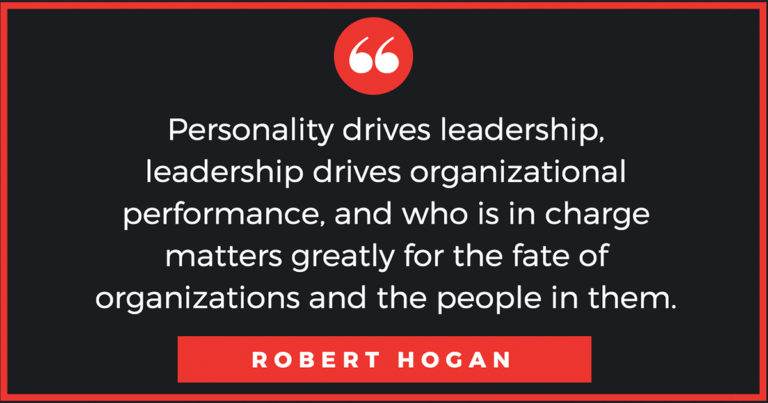 *This post was authored by Robert Hogan and published on Hogan Assessments.

These statements are true, and we can use this line of reasoning to improve the functioning of any organisational unit, from a football team to a sales team to a military team to a city council. As obvious as this line of reasoning may seem, it is radical news to most business school professors for three reasons. First, until the mid-1990s, academics denied that personality exists, or that it affects occupational performance in any significant ways. However, a series of research studies in the early 1990s showed, for those who believe in data, that people differ in meaningful ways (personality), that these differences can be assessed (personality measurement), and that these differences predict occupational performance. Second, until the early 2000s, academics denied that leadership matters. However, a series of research studies in the early 2000s showed that personality predicts leadership performance, and leadership performance predicts team or organisational performance. The personality of the CEO is the most important determinant of firm financial performance other than the industry sector in which the firm operates. And third, as of today, academics ignore the topic of organisational effectiveness—the term “organisational effectiveness” doesn’t appear in the index of any major research compendium. But clearly Singapore has a better economy than Somalia, and South Korea has a better economy than North Korea; moreover, the differences in their economic performance have a huge impact on the well-being of the residents in those countries.

This argument is so important that it deserves repeating. It goes as follows:

1. Personality is real: people are different, but their differences are consistent across situations, and this allows us to predict their typical behavior.

The next question concerns the personality characteristics of successful leaders. The data suggest that good leaders have most or all of the following seven characteristics.

The first and in many ways the most important characteristic is integrity. People need to know that they can trust their leaders not to betray, deceive, or exploit them. This is so powerful that a team’s ratings for the degree that they trust their leader is a proxy for team or business unit performance. People will not work for leaders they mistrust. Leaders need to take great care to gain and maintain the trust of their subordinates.

The second characteristic is competence—leaders need to know what they are talking about, they need to be well-grounded in the business at hand. Competence inspires trust, but more practically, staff need to be able to ask their managers for advice in solving the problems that come up constantly. In athletics, the team captain is often the best player on the team, and the best athletic managers know more about their sports than their rival managers.

The third characteristic is good judgment—subordinates need to know that their leaders will take them in the right direction. In the Vietnam War, a surprising number of newly minted US officers were killed by their own troops precisely because the troops thought their officers would get them killed.

The fourth characteristic is vision—leaders need to be able to explain to their staff why they are doing what they are doing and why it matters. A recent DDI survey of several thousand HR managers reported that 70% of the HR managers thought the leadership of their organisation lacked any vision.

The fifth essential characteristic is ambition—wanting to be in charge and to outperform rival organisations.  Ambition concerns enjoying competition, wanting to win, being persistent and resilient in the face of defeat, and never being satisfied with or complacent about current levels of performance. Leaders without ambition are empty suits.

The sixth characteristic concerns “the dark side” of personality. Dark-side characteristics are strengths that, when overused, turn into problems. Passion and intensity can turn into bullying and tantrums, a keen work ethic can turn into micro-management, self-confidence can turn into arrogance and the inability to learn from experience. These tendencies are almost impossible to detect during interviews. Left unchecked they will cause leaders to fail—because they destroy trust.

The final characteristic is “global mindedness.” This characteristic is important if an organisation is operating on the world stage. It is a personality syndrome that includes: being curious about other cultures and life styles; being tolerant of those other ways of living; and being able to adapt to strange circumstances while remaining focused on one’s competitive goals.